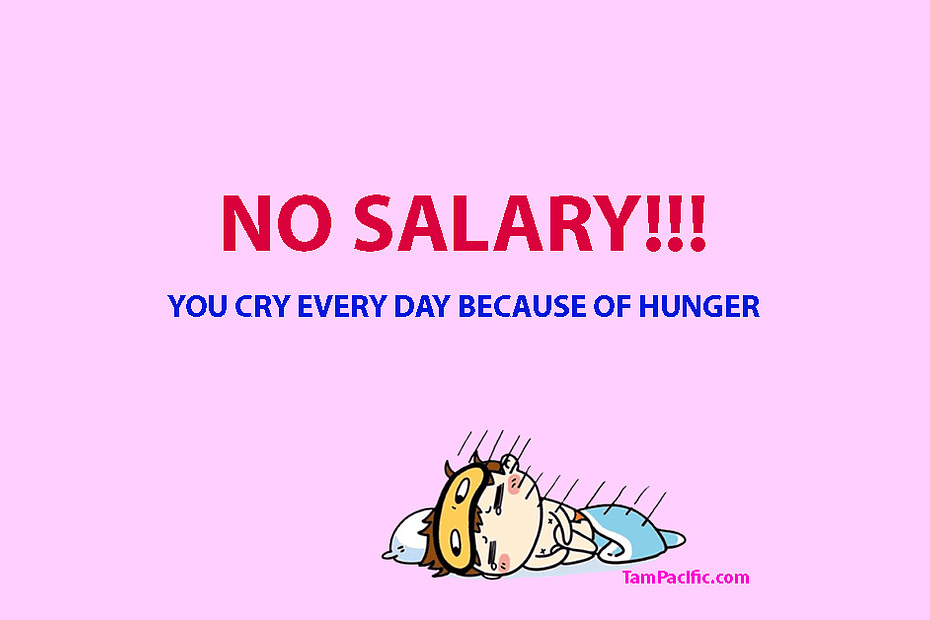 No salary. You cry every day because of hunger

Life is inherently struggling with many worries in life, but the boss has no one to understand for you. Wages are delayed, leading to many hardships for employees.

If the boss understood the employee, it wouldn’t be this rash. To know how many workers have to mourn every day because there is no money to pay for their daily living. Sometimes they still have to borrow continuously, to wait for the salary to pass.

They will pay back the expenses incurred while the compensation has not come home. Read and think about this life; it’s really. No Salary, Very Miserable, my friend! But how many bosses understand you now!

At the beginning of the month or the end of the month, many people wait for one person. So who is it that many people have to expect? There is nothing to be afraid of even without a person.

But with only one person missing, the whole village was in turmoil, the staff ran out of the train, ran away, the lovers parted, and the customers couldn’t stand still with the company.

Seriously, less than one person in a dozen people, but just a dozen people without receiving a signature and a signal from one person, all seem to want to spread negative signals together.

The story below, Mr. Tam Pacific heard from a few other brothers outside the company shared with me. Although I know that there are many hearts in private life, it is still a general rule. When the bosses and department heads don’t exist yet, how can the juniors and juniors have them?

As a result of a chain, the whole group of brothers and sisters below went on strike, quit their jobs, brought a complete production line to a standstill, and most of the company’s sales also fell into a jam.

Most of the brothers were crying and shouting on social networks, what will happen will come. Will customers immediately grasp the company’s mentality when something goes wrong?

The consequences would be enormous if the matter dragged on. However, the financial situation of each company was different from the other. If you are a conscientious owner, you must have planned the company’s business budget three months before or made a quarterly business plan.

This problem is only successful for companies that have a specific and ready strategy. As for business companies that do not have a clear plan, they must consider whether to cooperate or not?

If there is no salary, who will be miserable?

Usually, each resident is not a local in the area they live. They will choose to move from another location to this locality to do business, rent, and pay other living expenses. You have to think carefully about everything if you don’t want to start a career in that field empty-handed.

Example like this: If you move from other provinces to Saigon to do business and set up a company, as well as to work as a hired worker, you plan that if your feet are wet, you have to rent a house to live and work. There are many houses for rent to live through the day, then you consider working to earn money to spend. It is one of the most concrete and vivid examples.

Once companies where dedicated employees, no matter how loyal, fail to meet their living expenses for another month or two, then they have to give up on that business for the sake of life.

Of one’s extended family, they have to take care of more, not only about housing, food, but also money for school, care for elderly parents, electricity, and water bills, so many things. Must be sacrificed.

Therefore, business leaders must know how to retain their talents. Otherwise, the business will be disappointed in the future because of upcoming sales.

Mr. Tâm, having witnessed how many people did not receive a salary, quit their jobs and found other livelihoods. It’s also really heartbreaking for the leaders. Just because of one person, many loyal employees have to run to find another livelihood.

As a result, it seems that rival companies will be the ones to recruit the other company’s elite troops when this is an opportunity to take advantage of the talent possession of existing competitors. Have you ever seen a series of employees of company A jump to company B and company C?

In contrast, company A’s sales plummeted in the next few months, and company B and company C’s sales In the past, it was meager, suddenly overgrowing? That is also one of the problems because a part of company A owes its employee’s salaries.

You need to know how to look at the growing revenue and net profit ratio, no matter how many dozen of your employees are under you, have to crawl and borrow money to live through the day and like how?

However, it is also impossible to equate all of these bosses because most of the time, if you are a caring boss, you must know how to take care of your employees, don’t wait until employees complain and complain every day, then start. Care, that was not true!!!

There is no salary on time. How is the business struggling?

At this time, the amount of capital spent is relatively large, sometimes up to several billion, or a few tens to several hundred billion for such an investment. So, those bosses don’t have a large amount of cash, so they have to make short-term plans to have money to invest. Then what is the cause?

According to online news sites, most bosses are entangled in significant investments and often will not have enough money to pay their employees’ salaries. Begging for wages and promising to pay in a few days is to cover for those big investment projects.

If the other investment projects are successful, it will bring abundant money to business owners and a massive source of funds to pay salaries and commissions and promotions, and bonuses for all of their employees.

But. That is on the successful project plan, and if the project fails, how will it cause disaster now? That is a double-edged sword that most bosses have not considered up to this point. The sales department did not anticipate this incident and let the bosses know the plan.

No salary; you cry every day because of hunger.

To come up with the most accurate plan for each current milestone. Suppose the sales department offers several tens of billion projects, and the accounting department only has a few billion in hand, but the director still dares to take risks.

In that case, the risk is extremely high, not to mention the investment option. If misused, it will quickly bring businesses into Bankruptcy, pile up debts, get stuck in the Law without being able to disburse money, etc.

You can take a few minutes to reflect on life a little bit. Economists often said that the most vital asset of an enterprise is “People,” which means that it does not come to the company for a long time if the Human Resources department is not successful.

Driving this ship with the Boss and not being able to live when there are many problems behind, even if the business is big or strong, grows for a certain period, and then it will gradually weaken. Because of the leader, because the superiors are no longer interested in their business.

I hope you have read and understood and have your thoughts after this article. I was also a failure when paying my brothers late. It was one of the most valuable lessons I learned in real business.

Pay tomorrow afternoon!
But why so sad!
Thirty days, oh hard work.
But the money received, received not so much.
Know how much money to spend!
People understand that. Workers are very hard working.
Overtime every day, but not enough to cover life.
Oh, everything to worry about everything.
The meal is only melons and tomatoes.

Oh! Pity the miserable starry scene.
When the salary has to spend a lot of things
I hold several million in my hand
Oh, I also pay for people’s rooms.
Trade. The commercial scene hired meager wages.
Worried about plowing for many years, knowing how much is not enough.
Oh! The worker’s life is too hard, and the salary is not much.

There are a few hundred thousand left over, eating rice for an entire month.
How much is enough to live?
Borrow a little more to pack your bags, fill up with gas.
How do you get a salary but don’t?

And here are a few hundred thousand, not yet paying for electricity and water.
Workers work hard day and night.
Hard work, but the salary is not much.
Get salary, a month like a month!!!

A free solution to instantly increase website traffic that will give you great results. Today, our community consists of millions of members. Are you ready to grow with them now?

Find Out Product Now
We use cookies on our website to give you the most relevant experience by remembering your preferences and repeat visits. By clicking “Accept All”, you consent to the use of ALL the cookies. However, you may visit "Cookie Settings" to provide a controlled consent.
Cookie SettingsAccept All
Manage consent

This website uses cookies to improve your experience while you navigate through the website. Out of these, the cookies that are categorized as necessary are stored on your browser as they are essential for the working of basic functionalities of the website. We also use third-party cookies that help us analyze and understand how you use this website. These cookies will be stored in your browser only with your consent. You also have the option to opt-out of these cookies. But opting out of some of these cookies may affect your browsing experience.
Necessary Always Enabled
Necessary cookies are absolutely essential for the website to function properly. These cookies ensure basic functionalities and security features of the website, anonymously.
Functional
Functional cookies help to perform certain functionalities like sharing the content of the website on social media platforms, collect feedbacks, and other third-party features.
Performance
Performance cookies are used to understand and analyze the key performance indexes of the website which helps in delivering a better user experience for the visitors.
Analytics
Analytical cookies are used to understand how visitors interact with the website. These cookies help provide information on metrics the number of visitors, bounce rate, traffic source, etc.
Advertisement
Advertisement cookies are used to provide visitors with relevant ads and marketing campaigns. These cookies track visitors across websites and collect information to provide customized ads.
Others
Other uncategorized cookies are those that are being analyzed and have not been classified into a category as yet.
SAVE & ACCEPT
error: Alert: Content is protected !!